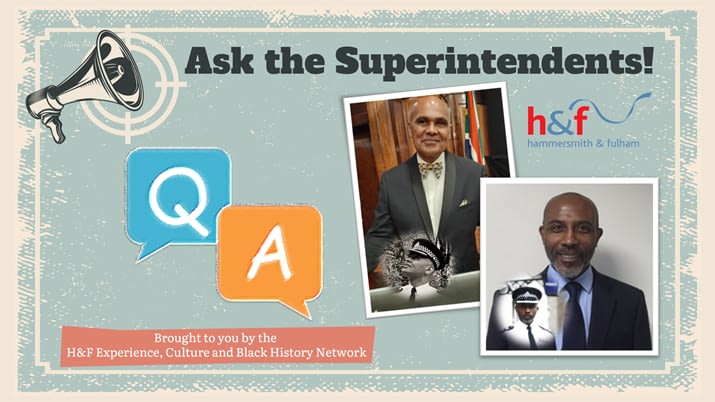 The Metropolitan police have denied the force is plagued by a culture of racism, misogyny, sexism and homophobia after an official report revealed shocking details of officers sharing text messages  sent as ‘banter’

Here is a chance to ask these former Superintendents their views in an open panel … so come and join us for an interesting discussion!

Gideon Springer From becoming a sergeant to working in Murder Investigation and running Golders Green Burglary Squad and then  working in New Scotland Yard at the time of the Stephen Lawrence Enquiry as well as being promoted to Chief Inspector in 2002 he became Chief Superintendent in 2011 and in 2014 took up the post of Borough Commander for Hammersmith & Fulham, retiring from this post in 2018. He has also been a member of the Black Police Association for over 25 years and an Executive member for the last 5 years of his service.

Paul Wilson retired from London’s Metropolitan Police as a Superintendent after 31 years of public service. He played a pivotal role in the creation of the UK’s first Black Police Association and was responsible for a significant number of reports centred around the issue of institutional racism and police service delivery to Black and minority ethnic communities, as well as a plethora of media appearances and contributions on the topic. He currently has a published book called Rocking the Boat: A Superintendent's 30 Year Career Fighting Institutional Racism