The acclaimed English Chamber Orchestra (ECO) recently visited Fulham Cross Academy. Ahead of the Cop26 conference and as part of LBHF Climate Carnival, the orchestra used music to illustrate the relationship between music, climate and ecology. The interactive concert, entitled “Memories of Summer”, was written, presented and performed by ECO cellist Alexandra Mackenzie with an ensemble of ECO string players. 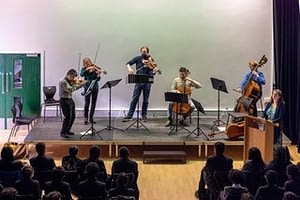 The concert, sponsored by the Barratt Foundation, featured music from the Middle Ages to the present day and explored how composers have written music about summer in response to their own time, place and climate. The performance included Vivaldi’s Summer from the ‘Four Seasons’ and ‘I do like to be beside the seaside’, with a hint of the Jaws soundtrack.

There were more than 200 students from year 7 and year 8 engaged in the workshops.

‘I liked how joyful and loud the music was. It made us all really happy, everyone was smiling’ said Max, year 7.

‘At first, I wasn’t very excited as Orchestra’s can be boring, but this was very loud and fun. I liked it when they talked about the poems by the seaside’ said Arthur, year 7.

Another year 7 student, Isaac, said, ‘This was one of the best orchestra’s I’ve ever heard!’.

In schools we talk about cultural capital and this was exactly that - at its absolute best.

The whole day was emotional for both staff and students. To hear from students that they had been emotionally moved by the music was incredible.

I certainly shed a few tears!

It was an absolute pleasure and privilege to hear the London Chamber Orchestra performing at Fulham Cross Academy.  Students were taken on a narrated climatic journey through the seasons from K-Pop to Antonio Vivaldi and from the Jaws theme tune to Johann Strauss!  The performances were expertly presented, and students were frequently informed about what to listen for in each piece which absolutely captivated their attention.  This was not only a welcome piece of live music (which has been sorely missed throughout the pandemic), but it was also a beautiful experience for all who had the opportunity to be part of it.  Come back again - we cannot wait to host you!